Search Listings
Back to Blog Posts
Prev Next

Please visit the first post of this blog, and then continue to subsequent posts from there.

It has been a while since I posted. My apologies! I have been busy serving my clients. I have missed posting! I hope not to go so long without posting any more.

Last time we explored Cityview, next stop on the Chisholm Trail

This week our next stop on the Chisholm Trail Parkway is Oakmont, which is Cityview’s medical district but first, I would like to share

The North Texas Tollway Authority (NTTA) opened the first of four direct-connector ramps between Chisholm Trail Parkway and Interstate 20 in south Fort Worth. Motorists are now able to travel from westbound I-20 to southbound CTP using the ramp.

Additional ramps at the I-20/State Highway 183 interchange and at I-30 will open as they are completed by the end of the summer, weather permitting.
The second of four direct-connector ramps between CTP and Interstate 20 in south Fort Worth opened July 26 as the North Texas Tollway Authority opened the ramp from northbound CTP to eastbound I-20.

A week earlier, the westbound I-20 to southbound CTP ramp opened to traffic.

Northbound Chisholm Trail Parkway motorists can now travel non-stop to eastbound Interstate 30, Summit Avenue, Cherry Street and Lancaster Avenue.
Also as of Aug. 3, motorists traveling along University Drive can now access I-30, as well as Summit Avenue, Cherry Street and Lancaster Avenue, on the new ramp located just south of the Vickery Boulevard intersection and just north of Union Pacific Railroad.
With the opening of this new University Drive access ramp to eastbound I-30, the old University Drive ramp is now closed.

These updates are taken directly from The NTTA and www.ntta.org newsletters which can be found here
https:/www.ntta.org/roadsprojects/projprog/ChisholmTrail/Pages/default.aspx 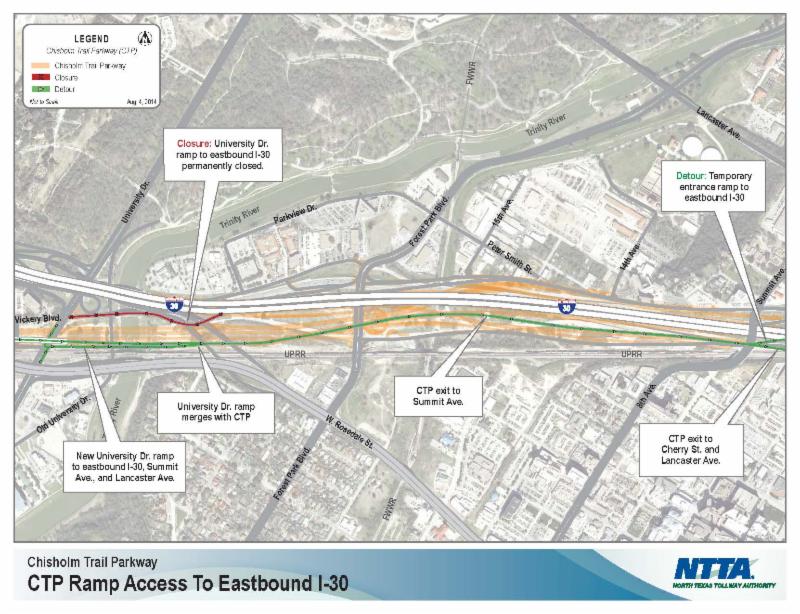 Now on to Oakmont!

Oakmont runs east/west connecting Bryant Irvin and Hulen. The CTP runs parallel and between Bryant Irvin. So, from Oakmont, you can access both Bryant Irvin and Hulen. This is an area with local shopping and entertainment, such as supermarkets, movie theaters, bowling, and fast food restaurants. Oakmont also gives access to several public and private schools, including Trinity Valley and Fort Worth Academy. Housing includes single family subdivisions and multifamily complexes. The area also includes many medical offices, hospitals, and assisted living facilities. The neighborhoods range from million dollar golf course estates, to one bedroom loft apartments, so the housing possibilities are endless in this area. There are also two golf courses in the area, as well as several city parks. Pecan Valley is a municipal course open to anyone. Mira Vista Country Club, which is part of the Mira Vista neighborhood, has a private exclusive course. Trinity Trail runs along the Clear Fork Branch of the Trinity River, which runs through the west boarder of this area.

Follow Oakmont West past Bryant Irvin and turns into Bellaire, turning back north towards Benbrook. It goes under the I-20 and circles back to intersect with Bryant Irvin near the Arborlawn exits which we covered previously. It winds through neighborhoods covered in the post Access to Chisholm Trail Parkway from Hulen and Bryant Irvin. Check out that post if you are interested in this area. I will cover the neighborhoods off Bellaire south of I20 on this post. 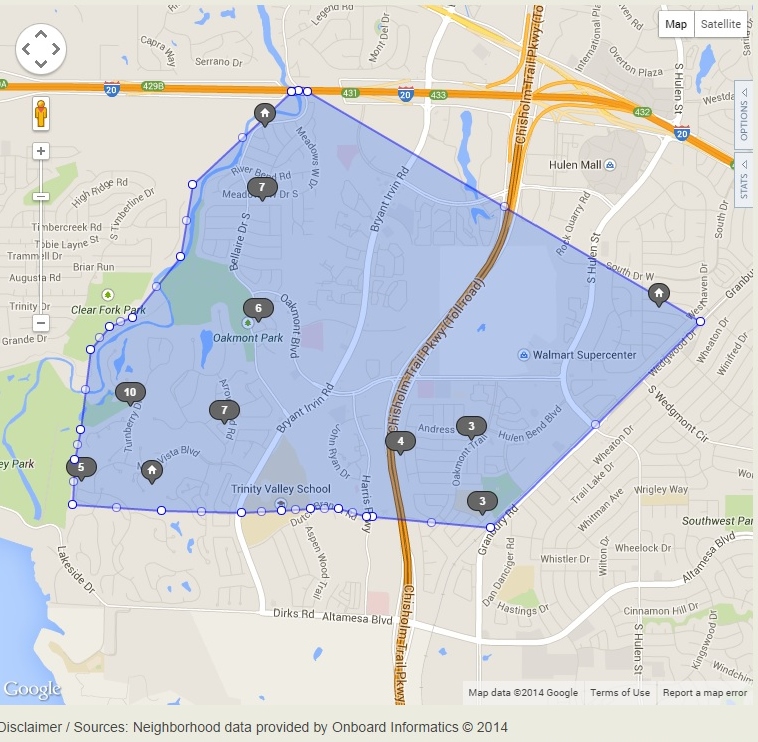 The neighborhoods west of Bryant Irvin include:

The Neighborhoods East of Bryant Irvin include:

Search Homes in The Oakmont area

If you'd like to know about the home buying process, we'd love to tell you all about it.

Make sure you follow this blog for more updates on the Chisholm Trail Parkway corridor!

Cityview, next stop on the Chisholm Trail Parkway and access to I30 NOW OPEN!

Please visit the first post of this blog, and then continue to subsequent posts from there. Last week we explored how to access Bryant Irvin ...Read More

Please visit the first post of this blog, and then continue to subsequent posts from there. Last week we explored the newest openned ...Read More

Please visit the first post of this blog, and then continue to subsequent posts from there. Last week I covered the area surrounding where ...Read More